Our goal was to leave Fishers Bay early to transit the Whale in the early morning, before waves could build or re-build.  Tuesday was predicted to be a good day, with winds at 12-14 kts and swells at 3.5 – 4 feet. 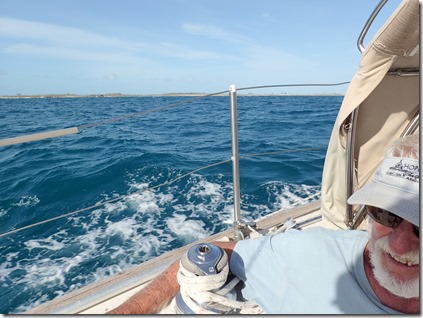 The so-called Whale Cay passage is how most boats with a 3.5+ draft travel from the “south” Sea of Abaco to the “north” Sea of Abaco.   This north-south division is caused by a series of shallow, shifting sand bars between Treasure Cay (actually connected to Great Abaco Island) and Whale Cay, which run across the Sea of Abaco.   Northbound boats travel out into the Atlantic Ocean at the top of Great Guana Cay, around Whale Cay, and back into the Sea of Abaco northwest of Whale Cay.  It’s not so much the traveling out into the ocean that can make this passage problematic, it’s that the cut northwest of Whale Cay is only 12’ deep.   When large ocean swells, particularly from the northeast, hit these shallows, they can create rage conditions.  Meaning the super large waves break across the cut.  In a sailboat like ours, it would be like going over a waterfall.  (Or down a toilet that is being flushed.)  You don’t want to do it.

So we watch the wind conditions and the wave heights – just because the wind is down, the waves may not have calmed down yet, or a storm to the north/east might be sending monster waves our way.   And we make sure Motu Iti can roll a lot without anything on deck falling off the boat or crashing to the floor down below.

Here’s our passage:  https://youtu.be/SvUU5yJe9I4   Rolly, but certainly not the worst Whale we’ve done.

We arrived at Green Turtle Cay and proceeded directly into Black Sound.  The entrance is reportedly 4.5’ at MLW and we draw 5’, but with 2 hours past low tide, we figured we had enough water.   No problem.   As we motored to a mooring, a woman on a trawler approaching us called over:  “How much water?”  We held up 5 fingers:  “We draw five feet.”   “Great,” she smiled, “we’ve all been waiting.”  And sure enough, another trawler and two sailboats passed us, headed out the channel.

Our last night on the water. 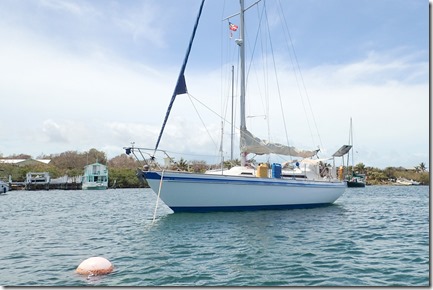 We relaxed with a nice dinner and a glass of wine.   Sad to be leaving the boat, but looking forward to seeing family and friends.