With over 150 years of active service, Hope Town’s candy-striped lighthouse remains the most recognizable symbol of this lovely community.

But when the British built it in the 1860s, local residents protested.  Its light would soon end their careers as scavengers of ships wrecked on the shallow reef, oceanside, just east of Hope Town. 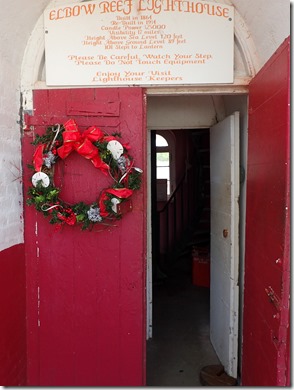 You can climb its 101 steps, which wind, nautilus-like, around a central pillar.

Along the way, stop and enjoy panoramic views of the harbor through its arched windows. 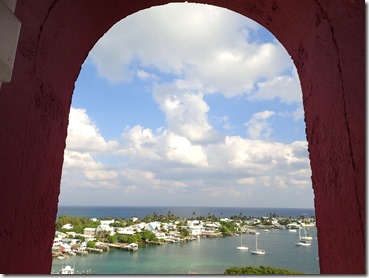 These kerosene and air tanks are located on a landing just over halfway up:

They fuel the 100 year-old burner which illuminates its “first-order five bulls-eye Fresnel lens.”  Developed in France in the early 1800s, Fresnel lens focus an amazing 85% of a lamp’s light.  Fresnel lens are ranked by “order,” which measures refracting power.  A “first-order” lens is the largest and most powerful.

The lens floats on a bed of mercury and is rotated by a weight-driven clockwork assembly wound manually by lighthouse keepers every two hours—every night.  Yes, the Elbow Reef light still has lighthouse keepers.  And many devoted volunteers who are working to restore it.  Lots of chipping of rusted metal – by hand, with hammers.

The final steps to the top of the light are really a sort of ladder.

And then you open a little door – here’s the “doorknob.” 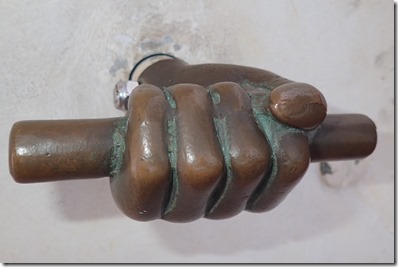 And crawl out onto a walkway that encircles the light.  For a photo op.  Here we are.

And here’s our boat.

The pretty one on the right, in the foreground.