We traveled through New Smyrna Beach in Central Florida on a Sunday.  It was a zoo.  Flotillas of floating fun-seekers.

There were so many little power boats making wakes that the waterway was like the inside of a washing machine.  Here, there and everywhere they zoomed and darted.

Almost every population center by the water has some sandy island or spoil area or sand spit that becomes party city on the week-end.  In Detroit, it’s Gull Island by the mouth of the St. Clair River.  In New Smyrna Beach, it’s the Ponce de Leon inlet.  You can see the lighthouse, above.  And below you can make out some of the hundreds and hundreds of little power boats pulled up on the beach or anchored near by.

Here’s a pontoon boat that sells ice cream to boaters.  We saw another one like it selling hot dogs. 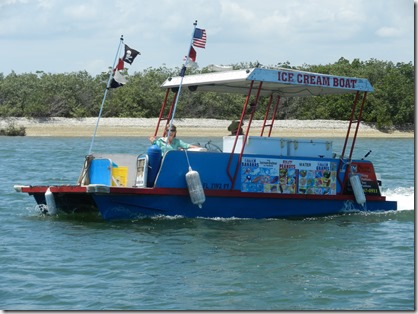 There was even a balloon.

Makes us long for those remote areas of GA and SC where we seldom see another human being all day.

P.S.  Yikes – sometimes you get what you wish for – see later post.