Windy and rainy here in Hope Town.  No sailboat races last Wednesday due to high winds — 20+.  Postponed again Saturday due to snotty weather – too cold to be out in the constant rain for 3-4 hours.  Rescheduled for this Wednesday – when it’s supposed to be light, albeit cloudy.

It’s been mostly rainy and cloudy for a week.  Boatbound.  Everyone going crazy from being trapped inside their boat or cottage.

Peak wind gusts at West End, about 80 miles west of us, were recorded at 60 mph last night.   We had 30-35 in the harbor.  Howling.  Rocking and rolling on the mooring.  Sleeping in the main cabin to lessen the motion.  And lots of rain.  Usually a mix of rain and sun every day, but Saturday it rained ALL DAY LONG.

But even with the less than picture-perfect weather, the beaches are still stunning.

This is our beach walk on Sunday, on our way to get chicken souse at On da Beach, a beach bar and grill a mile south of the settlement, with the best souse ever.  You have to reserve it in advance.

Lack of sun means our solar panels can’t make electricity for us and we have to run the engine and make power with the alternator.  It also means our solar shower won’t work.  Goldwin managed a shower yesterday with tepid water – not too much screaming.  (And the power was on all of Abaco – a fault at the power plant – we weren’t the only ones.)

We bought two different brands of solar showers about two years ago.  This one lasted. 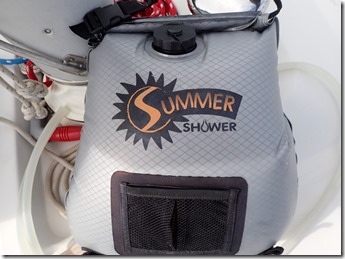 With only one bag, the water ran out and I didn’t get a shower yesterday.  Plus, my solar hair dryer, i.e., the sun, was not cooperating.  So, today I dinghied into the Lighthouse Marina with my towel and electric hair dryer and plunked down $5.25 for a real shower.  I was just ready to step into the shower stall when the electricity went off.  Oops, no way to pump the water.  About 10 minutes later, the generator started blasting away and I was good to go.  Finally.  Clean.

I washed it after the last race, folded it and put it in the clothes bin.  When I got it out in preparation for the (cancelled) race last week, the shoulder was slightly wet.  I hung it up.  Two days later it was all damp and two days after that, it was all wet.  The washer hadn’t gotten the salt water out of it and it was attracting moisture from the air – of which there was A LOT.  Sure enough, I could taste salt on it.  Now it’s been thoroughly rinsed and, hopefully, will dry before Wednesday morning.