The power is out in Hope Town – and all over Abaco.  It’s been out since Friday morning.  And it’s STILL OUT.

Bahama Power and Light provides electricity for Abaco.  But not now.  By Saturday, it was known that the pump for a cooling system at the BPL Wilson City generating plant had blown, causing a complete shut down.   On Sunday, a BPL post on the Hope Town Bulletin Facebook page explained that a special flight was being arranged to bring a new 3000 pound pump directly to Abaco from Arizona, scheduled to arrive late Sunday.   With immediate installation, BPL predicted that power would be restored Monday morning … or afternoon (hedging their bets).

On Monday, we could still hear generators running in town.  According to a new BPL post, the needed part had not arrived due to “the flight facing a weather delay in Texas.”  But BPL was “optimistic” that the part would arrive Tuesday.    A Hope Town resident challenged BPL’s explanation on FB:  “Another coincidence/excuse?  So easy to blame the weather.”  And posted a screen shot of weather radar of Texas, showing – NOTHING.

Since Friday, BPL has managed rolling blackouts – two hours on and four off.  But that has broken down.  Internet is intermittent.  The local cable TV station is temporarily off the air.  Sunday services went well during the 9 am – 11 am “on” rotation, but were interrupted after that.  Some restaurants in Hope Town have closed.  On Man O’ War, the cay to our north, the grocery store has supposedly run out of fuel for its generator and closed.  It’s the only grocery store on the island.  A Hope Town Sailing Club member “borrowed” a generator from a nearby restaurant so the Saturday night Stand-Up a/k/a party, could proceed.

According to the Bahamian Prime Minister, the outage is “inexcusable” and “grossly negligent.”   Nassau’s Tribune 242 claims tourists are “leaving left, right and centre.”  Patience is wearing thin.  People miss their TV, hot water, and internet.

Here aboard Motu Iti, we are not so dependent on BPL.  We make our own power.  Or rather, our solar panels do. 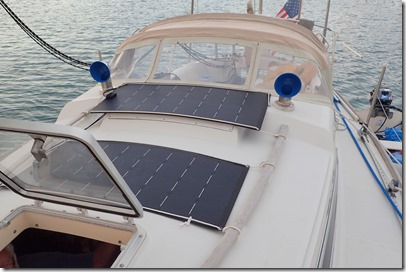 The panels run our refrigerator, computers, lights and radio. 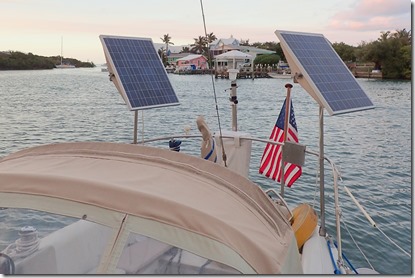 Our stove/oven is powered by propane, stored in tanks.  Solar showers (bags of water that heat up in the sun) provide hot water for our showers.  Our heater (not needed now in our 81/73 degree weather) runs on diesel.   Water (which we buy) is stored in a tank onboard and foot pumps push it through our faucets.   We are off the grid.   We don’t always know when the power goes out on shore.  Until the grocery stores close, of course.   So far, so good.  More later.

4 thoughts on “Off the Grid”