Controversy on Elbow Cay, of an environmental nature.  An unknown couple from Florida purchased a large lot north of the settlement of Hope Town that runs from dunes on the ocean side, across the cay, to the Sea of Abaco side, intersected by a dirt road – the only road northbound.  Originally dense foliage and jungle-like —

It’s recently been clear-cut.  The architect reportedly likes to work on a tabula rasa.  The dune is now bare – much blowing of sand during recent high winds – and almost every scrap of greenery has been removed.

Last Saturday, returning from our beach walk, we discovered that a green, tarped cyclone fence had been built on either side of the dirt road, effectively blocking the ravaged landscape from view.   Saturday night, these words were added: 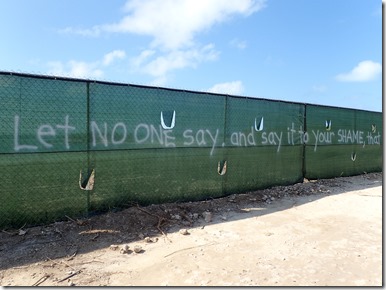 It says:  “Let no one say, and say it to your shame, that all was beauty here before you came.”

The other side of the fence now says:

“This is a crime against nature and the Bahamas.”

The source of the “shame” quote was the subject of a New Yorker essay in 2014, which concluded that the author is unknown.  It is generally believed to be a chastisement by English villagers in the early 20th century of city dwellers whose week-end motor car excursions littered the countryside.   The quote appeared on the silver screen in a 1940’s horror film.

Not everyone shares the sentiments now adorning the long green monstrosity, resulting in animated discussions throughout the settlement.   You?

One thought on “Protest in Paradise”