The 15th Annual Writers’ Read this week featured stories by members of the Hope Town Writers’ Circle, including Goldwin and myself.  The Read honors  102 year-old Adelaide, who is a published poet and long-time Hope Town visitor.  Here is her portrait, which appears on each Writers’ Read publication and announcement.

We read each of two nights to standing-room-only audiences at the Harbor Lodge — no admission is charged and adult beverages are plentiful, so the audience becomes more participatory as the evening progresses.  (Or, as Goldwin puts it:  a rowdy and drunken audience cheers us on.)

Our poetry and prose  ranges from the hilarious to the poignant, relating cherished memories – from the long ago and not so long ago, reflections of life in Hope Town – new and old, and provocative observations about life’s events – great and small.

Last May I fell into conversation with a Missouri farmer while sitting on the bus stop bench in front of Harborview. I was waiting for the after lunch 2 o’clock re-opening. He was visiting Hope Town for the first time, wearing a Hawaiian shirt he’d just bought and would probably never wear again. The farmer reported that last winter was “just right.” The calves’ ears did not freeze and it wasn’t muddy, so the cows could clean and dry their newborn calves.

At 2 o’clock I went into Harborview. After choosing my items, I watched as the middle-aged man ahead of me in the checkout line placed his groceries next to the bar code reader. From behind the counter, Mercedes examined his selections while shaking her head. With her wonderfully melodious Cuban voice, she commanded: “You don’t want to buy those. She did not tell you to buy that. Don’t tell her you got that from me.”

I couldn’t help but snicker, thinking, “that poor man.” She looked at me, still shaking her head, and asked: “What? Do you think you’re better?” That stopped me mid-snicker, rightfully chastised. I looked down at my rock hard avocados and remembered the day before when she had taken an overripe pineapple from my grasp and brought me a perfect one.

And then there was the time Nancy showed me the Snapple Mango she preferred after I’d bought the wrong one. Mercedes called to her. “You show me next time, I’ll make sure he doesn’t make that mistake again.”  Nancy smiled.

Here is Nancy’s:  (Mine is longer – about racing on Rage and generously cribbed from my blog entries.) 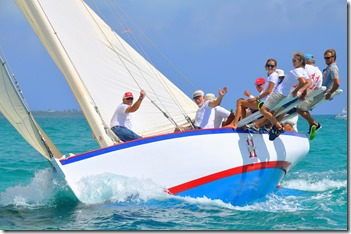 Twelve of us on an old wooden boat. But not just any boat – the Abaco Rage. A traditional Class A, Man O’ War built Bahamian sloop, with candy stripes ringing the top of her mast in honor of Hope Town, her home port. She’s named after tsunami-like conditions created when huge swells from the deep waters of the Atlantic Ocean roil and froth through a cut in the reef onto the much shallower Sea of Abaco.

Rage is 28 feet long with a solid wood 38 foot boom and a mainsail that goes up forever. That much sail area needs lots of ballast – human ballast. That’s the crew’s job. We use our weight to balance the boat by sliding out onto 10 foot long hiking boards, called pries, that stretch out over the water. Add a masterful helmsman and tactician, plus expert sail trimmers and beer passers, and we’re ready to race. Our instructions? “Have fun.” And we sure do.

The starts are a pure adrenaline rush as the race boats aggressively compete for a prime spot. Last race, the entire fleet was early, all clotted together at the line, letting out their sails to depower and slow down. Except Rage. We snaked up to the line in slow motion until a minute and a half before the gun, then trimmed in her massive mainsail and powered up — wow, does she accelerate. We overtook the stalled fleet just shy of the line, charging forward at full speed as we threaded our way through the clustered boats with inches to spare, and crossed in clear air just as the gun sounded.

Tacking on Rage is controlled frenzy as sails, crew and pries all move from one side of the boat to the other. “Tacking in three, two, one,” the skipper warns, then talks us through it. “Weight to the middle” – and we slide down the pries to regain the deck; “pries to the middle” and we drag them inboard. Her massive boom sweeps above us, just two feet off the deck, as we frantically flatten ourselves to stay beneath it and scramble into and over each other to keep out of the way as the pries are shoved across the boat. Oh, and please don’t put your hands or feet on the jib sheets, which run along the deck. And try not to fall off the boat as the low side becomes the high side. “Pries out” and they are yanked out over the water. “Weight out” – and up the pries we scoot, hooking our ankles underneath so we don’t fall off.

We pry riders use our weight to keep Rage at a perfect heel, rail just nudging the water. “Here comes a puff,” and we butt walk ourselves further out the pries to compensate. “Watch for a wind shadow,” and we crab our way back down. Once in the groove, the tactician bellows, “Let ‘er walk, skippa,” as Rage surges forward, slicing through the waves. Riding the pries is the best part – flying high above that sparkling turquoise water.

On the downwind leg, Rage’s long boom swings out, perpendicular to the boat. The goal is to heel over so that the tip of the boom just clears the water without touching. It’s okay if the sail caresses the water, but when the end of the boom smacks into a wave, it stops us like an anchor. Rage loves to run off the wind – we ease past boat after boat.

We race a triangular course – called a pizza – with a hot dog – that’s another leg to windward, back downwind and windward again to finish. No matter how we place in the race, everyone has a blast, sailing a classic Bahamian race boat on the brilliant blue waters of the Sea of Abaco.