HopeTown Sailing Club’s first race of the season.  Postponed from yesterday, when the winds were zero, gusting to 4.  We raced on Rage, a traditional wooden Bahamian racing sloop, built on Man O’ War, the next island north.  Twenty-eight feet long, with a 38’ boom.  Lots of power.  So lots of ballast, a/k/a crew, is needed to keep her heeled at just the right angle to go fast.

Today was light air, maybe 6 – 8, so fewer crew were needed – just eleven of us.  The core group on Rage knows this boat and these waters – can predict whether the tide will help or hurt us, when a wind shift is coming, where the deeper water is, and how to make the boat go fast.  The rest of us are ballast:  move up to the high side as a puff heels us over; scoot to the middle when the boat flattens; slide forward downwind.

Eleven boats started – some race boats, some cruising boats.  We slowly made our way to the starting line, the tactician calling out the time every 30 seconds so we’d reach the line just as the gun went off – not too soon and not too late. 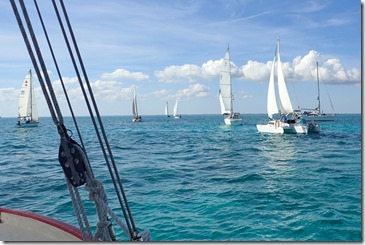 With amazing skill and confidence, the skipper threaded Rage through heavy traffic, pulling in her huge main to power up as she closed in on the line.  All eleven boats were trying to do the same thing – you could feel the tension.  Rage’s skipper nailed it – top speed right at the line with clean air. 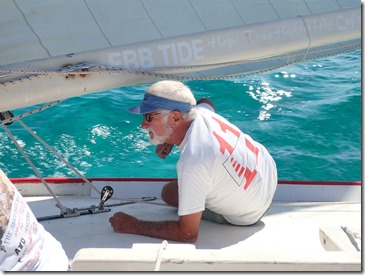 Rage’s fastest point of sail is not to weather, so we were not surprised to reach the first mark in fourth place.  But Rage loves a broad reach.  We smoked the next leg, pulling up with the leaders – a consistently fast Pierson and a new high-tech racing boat.

The wind stayed light, making for easier tacks and jibes.   Plus, I wore my new Gill sailing pants – sort of like bike pants, with a bit of padding at the knees and on the bottom.  Perfect for sailing on Rage – more comfortable and fewer scrapes and bruises.

By the end of the race, after another two weather legs, we were a bit behind the two leaders.  But moving well and having fun.  Here are the only two boats in front of us half way through the race, sailing downwind, wing-on-wing (one sail out on one side and the other sail on the opposite side).

We were third over the line, but on corrected time (each boat is handicapped based on a complex application of incomprehensible numbers), Rage placed second.  Due to our mathematical handicap, we lost to a boat that finished over three minutes behind us.  That’s racing.

We entered the harbor under sail, gliding through the moored boats right up to Rage’s mooring.  What a fabulous day, spent on the gorgeous blue-green waters of the Sea of Abaco.