If your boat is on a mooring, like ours is, you want to make sure the mooring is strong and immoveable. 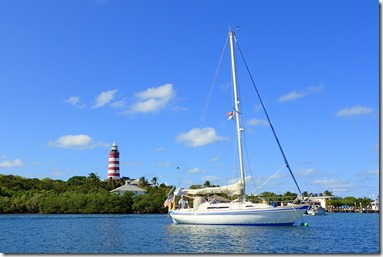 You don’t want your boat dragging its mooring across the harbor in a strong blow and you don’t want the mooring’s shackles or chain to rust through, leaving your boat drifting aimlessly.  Both of which have happened.  That’s how this boat ended up here, at the far end of Hope Town’s harbor.

Like many crowded harbors, Hope Town has moorings strategically placed to maximize space for visiting boats.  Anchoring, which takes more room per boat, is prohibited.  But when you enter a harbor and take a mooring, you can’t see what is below the water and just have to trust that the mooring was well-built and is well-maintained.  All you see is this:

Our mooring is safe.  Because its owner, Truman, built it that way and because he checks it regularly.  This morning, Truman is in his boat with diver Souvy, checking his moorings.

Truman’s moorings are 8’x4’x4’ single blocks of cement, each weighing thousands of pounds.

There’s a metal ring embedded in the concrete; attached with a large shackle is 20’ of 1” galvanized chain.  Two separate 1 1/4” ropes, each twenty feet long are attached by shackles to the chain.  Each has a float – Truman’s are green – and an eye.  The eye is pulled up on your boat and placed around a cleat at the bow.

Souvy is diving on each of Truman’s moorings, along the chain to the cement block, to check for rust, abrasion, and any other weaknesses which could endanger the mooring’s integrity. 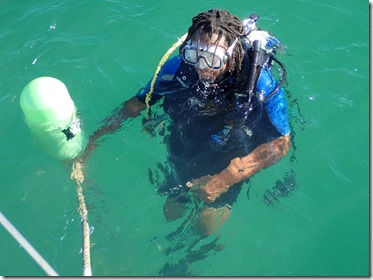 Now they are checking our mooring.

All okay.  Another safe season.  Easy to sleep at night.

One thought on “Checking the Mooring”