We’re finally in the water.  Yeah!!!!  Just launched Friday; but not until noon due to strong winds again.  The crew here at Green Cove Springs marina really know what they’re doing and did a great, i.e., careful, job.

First Motu Iti got a little trip on a trailer through the marina. 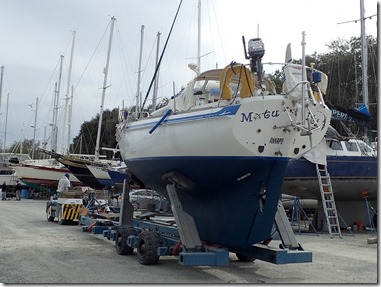 Then she was picked up by the travel lift.  (I know you’re thinking:  “Wow — what a beautiful boat.”)

Maybe, in the next picture, you can see Goldwin underneath the boat, on his back, painting a tiny part of the bottom of the keel that couldn’t be painted before when she was on the hard.  Now she is perfect and ready to be launched. 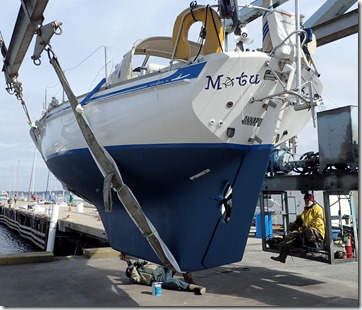 Finally, lowered into the water.  Very gently.  No drama.  Just the way we like it. 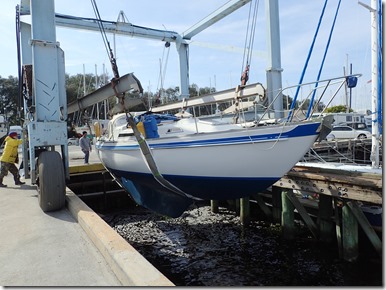 Now the mast, which had been previously moved to lie horizontally on upright barrels along the dock.  A wide webbing strap was tied around it and attached to the crane’s huge hook.  Up came the mast, three guys anchoring the bottom and guiding it to the boat.  Then lowered into the boat VERY SLOWLY and CAREFULLY. 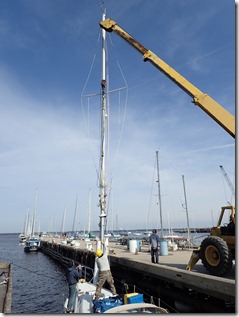 The bottom seven feet of the mast actually goes through a hole in the deck and rests on the keel (on a silver dollar for good luck).  Don’t crush your fingers; be sure that none of the interior wires that emerge at the bottom is pinched or mutilated in the process; make sure the mast is straight and facing the right way; check that the lines and rigging aren’t tangled.  The rigging that keeps the mast in place was then connected on both sides and fore and aft.

And finally we look like a real sailboat.  Tied to a dock, (no sails on yet – tomorrow), and going down a ladder to get on the boat instead of up a ladder.  Much better. 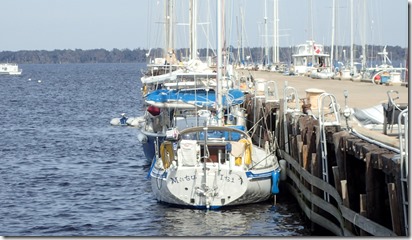 That’s it.  Small steps, but in the right direction.  We celebrated with wine and chocolate – no cooking required. 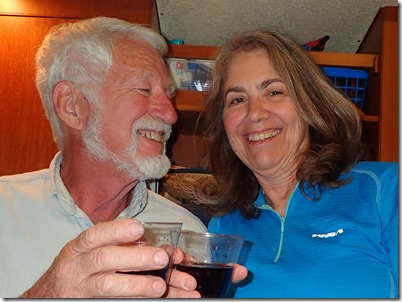