Race Day:  Twenty-four of us on a 28’ boat.  But not just any boat – the  “Abaco Rage.”  Named after “rage” conditions created when a large body of water such as the Atlantic funnels into a smaller area such as the Sea of Abaco, through a very small cut in the reef.  A wall of water boils into the cut, like a mini-tsunami, taking out anything in its way. 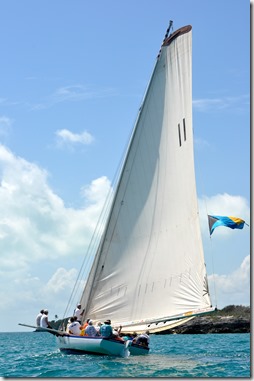 Rage doesn’t have a motor, (or any electronics or hydraulics or winches), so she has to be towed out of the harbor to the race course.  Since we left the harbor at low tide and she draws 6’, everyone onboard had to stand on one side and towards the bow to lift the keel a few inches off the bottom.  Whew, we made it.  Once out, we hanked on the jib and raised the sails.  The sails go up forever.

Hopetown is her home port, so the top of the mast is painted like the Hopetown lighthouse.

Rage is sailed in the Hopetown Sailing Club’s races every couple of weeks and takes all comers as crew.  Which is a good thing because the only way to keep that small a boat with that much sail area from flipping over is peoplepower.  Although twenty-four is the most crew she’s ever raced with.  That’s about 3,000 people pounds to use as ballast.

About 5-6 core people really, really know how to handle her and the rest of us just followed directions.  (Okay, some gave a lot of unsolicited advice, which was largely ignored.)  There was no yelling.  Only one question was asked:  “Do you know how to swim?”  Only one restriction was placed on the crew:  “Have fun.”   And we sure did.  What a thrill!

We floated around, near the starting line, until about 3 minutes to the gun.  Boy does she accelerate when they trim those huge sails.  As we threaded our way from the back of the fleet to the front, we cleared two boats – one to port and one to starboard – by just inches.

The race started halfway to Sugar Loaf Cay, with a windward leg to a mark off Hopetown.  Then a reach up to Man O’ War Cay over the shoals – “do you think we’re going to run aground?” – “a little bit that way looks deeper” – and around Garden Cay onto what became another windward leg past Point Set Rock (which we cleared by only 50 feet, trying to stay on port tack).  Then back towards the Parrots to finish.  Basically a triangle with a start and finish to windward, in puffy, variable wind of 5-12k.

Rage goes fastest reaching and running – it’s her huge main.  And she must be heeled over, with her rail just barely out of the water, to lengthen her water line.  It was light air for most of the race, so heeling was critical.  That’s the crew’s job – to keep the boat at that perfect angle – not tipping all the way over, but not flat.  We did that by moving ourselves from one side to the other.  Three long boards called pries, about 2×10”, are moved from one side to the other whenever we tack so that we can climb out over the water for better leverage.  “In, in, IN, IN, IN,” and you move yourself to the low side.  “Out, out, OUT, OUT, OUT” and you scuttle to the high side.  A couple of soft “in’s” or “out’s” and you lean forwards or backwards.  Louder, more urgent “in’s” or “out’s” and you scootch your bottom out the plank or down towards the low rail.  When you are way out, you wrap your legs around the pries and hook your ankles together underneath.  And you learn and remember the names of the people on the pries on either side of you just in case you have to yell for help.  I’m in the dark blue shirt on the far right in the photo below.

Yep, on starboard tack, I got to ride the pries.  That’s the best part – riding the pries.  Am I having fun or what? 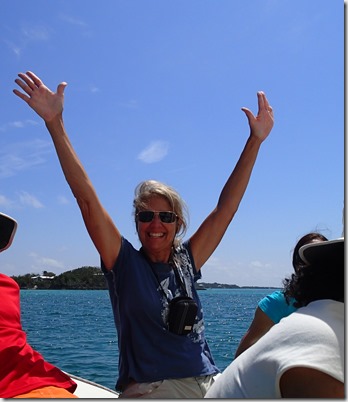 There was one man right in front of me on the pries – we had to move out and then back down the pries in unison so many times – and so closely and quickly – that I thought we were going to have to get engaged.  Luckily, he was so much younger than me that it never became an issue.

On port tack, I was on the low side, crouched down with my toes on the rail making myself as heavy as possible while staying as close to the rail as possible.  Sometimes the rail dipped too far and we got blooshed.  The first time that happened, one woman said she thought she’d wet her pants. 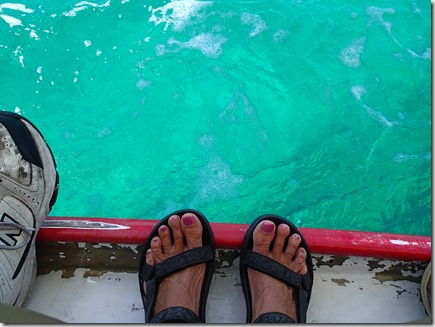 Here’s what port tack looked like for me.  I’m curled over next to the man in the hat.  Goldwin is low man under the jib. 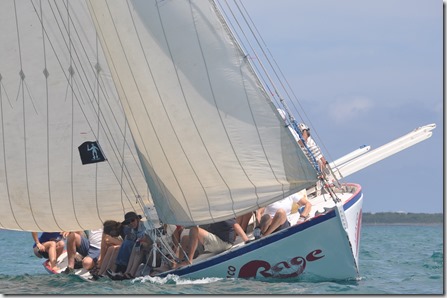 Mostly Goldwin rode on the bow – helping with sail trim. 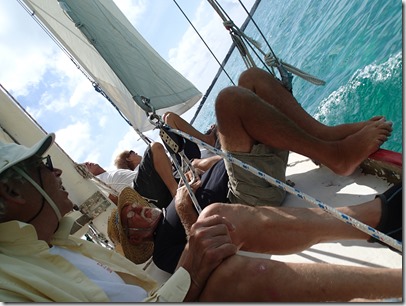 Tacking was the tricky part.   Her massive boom sweeps across only 2 feet off deck.  Twenty-four of us frantically flattening ourselves to stay beneath it.  And scrambling into and over each other to keep out of the way of the 2×10 pries as they are pulled inboard and then shoved to the other side and hauled out over the water.  Oh, and please don’t put your hands or legs or feet on the jib sheets, which are led along either side of the deck to the cockpit.  And try not to fall off the boat as the high side becomes the low side.  Here we are tacking.  I’m the one right in the middle, practicing the yoga puppy pose and squeezing myself between two of the pries.  Goldwin is just forward of the shrouds. 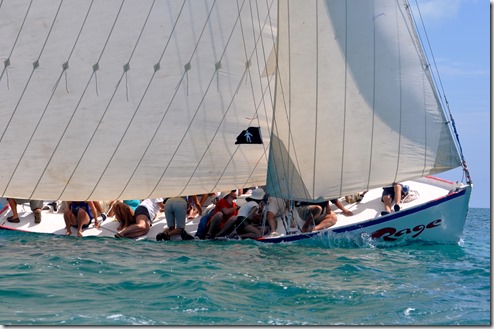 If you happen to end up in the drink, the cockpit crew will throw you a line – grab the line or be left behind.  Although we had so many little runabouts following us and taking pictures that you would have been picked up immediately.

Here’s the view from out on the pries.  I hung my underwater camera around my neck and took pictures when I could.

This is what we look like out on the pries – about twelve feet over that gorgeous water.

On the downwind leg, the boom goes way out and the trick is to keep the boat heeling towards the boom, but not let it dip into the water.  The first time the tip of the boom got dunked, everyone overreacted and the boat started rocking – a death roll.  Hard to stop it.  After that, we moved more carefully.  It’s okay if the bottom of the sail caresses the water, but an underwater boom is like an anchor.

We had a bit of a scramble after we crossed the finish line.  We were all on what had been the high side – pries out – when the mainsail was dropped.  It came down on our side – and its weight tipped us further, the boom swinging out, weighing down what had been the windward side.  Crew were hanging onto the boom like monkeys out over the water and one man was left clinging to one of the pries, being submerged as he was dragged along.   After we got settled, the captain wanted to make sure no one had taken pictures.  I wish I had, but it was too chaotic.

And guess what?  We were third over the finish line, but on corrected time, Rage won the Burton Russell Trophy.  Hurray!!!

After the race, beers were on the captain at Cap’n Jacks and then we all went to the Hopetown Sailing Club for a party.  Go to Rage’s blog for a picture of the crew – me on the left, kneeling in the front and Goldwin in the back on the right:  http://abacorage.wordpress.com/

PS: Many thanks to friends on a chase boat who donated their pictures.

3 thoughts on “Racing on Rage”