Now that we’re in SC, we’ve slowed down some.  In fact, we actually spent THREE NIGHTS at a marina, tied to a dock.  Not just any marina, but Barefoot Marina, highly recommended by our daughter and son-in-law.

The Marina sponsored a pig pull one afternoon and it was fabulous – and free. Great pork, great sauce, great spices; and the marina supplied beer and soft drinks. About 60 boaters from the marina came and everyone brought a side dish. Yum, yum.  My “patio beans” were gone in a snap; a great recipe from my mom.

We also had a chance to buy groceries – a lovely couple we met at the pig pull, (on a boat across the dock from us), gave us a ride to the grocery store. And the marina had a HOT TUB and WARM showers and a laundromat and internet.  We even went out to dinner.  And Goldwin had a chance to replace our bilge pump – sucks out water that accumulates in the bottom of the boat.

We like to leave early – at first light.  Which prompts me to pass along a conversation between Goldwin and a man on a boat across the dock from us.  The man was telling Goldwin that he intended to leave early the next morning and he hoped he didn’t wake us up with the noise.  Goldwin told him “no worries,” that he always got up early because he had to go to work, but his wife liked to sleep in.  EXCUSE ME?  Which of us has been retired for the past 18 years and which of us got up at 6am to commute into DC?  It’s true that I don’t like to get up early and he does, but the implication ….   Some confusion, I fear.

Here is the sunrise the morning we left Barefoot Marina, which is just south of the Barefoot Landing Swing Bridge.

More typically, we are not in a marina, but at anchor.  With long days, we usually anchor and immediately go down below for dinner and bed.  But since we’ve slowed down, here we are relaxing, spending the late afternoon at anchor.  It’s peaceful and quiet and naturally beautiful. 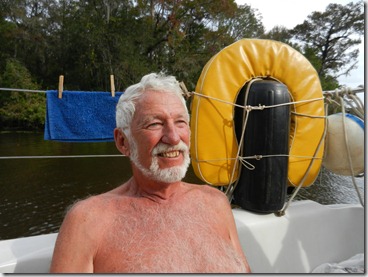 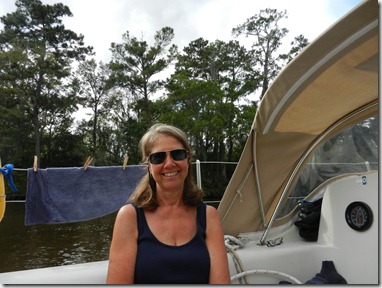 A good anchorage has a water depth of about 7-15’ feet and is protected from waves and wind by shoreline, trees and maybe some land elevation. The bottom has to have good holding – soft sand or not-to-soft mud.  Since anchoring is prohibited in the Intercoastal Waterway, plus other boats would run into us, we usually we duck into a creek or behind an island.

Monday night we anchored in Cow House Creek, behind Richmond Island.  Because we are in the Waccamaw River, which is basically a cypress swamp, we used a trip line on the anchor.  This involves tying a line to the pointy end of the anchor so we can pull it out if it gets snagged on a submerged log.  The other end of the trip line is tied to a little buoy that floats on top water.  Here is our white buoy – the “wake” is the impressive current running in Cow House Creek.   (I do not make up these names.)

The osprey nests in the cypress swamp are very blinged out with spanish moss – larger and fancier than their Chesapeake cousins.